The 228 Optical Wavelength Meter uses a proven optical interferometer-based design to measure the wavelength of CW lasers to the highest accuracy available. Two versions are offered. The model 228A is the most accurate, measuring wavelength to an accuracy of ± 0.3 pm. For less exacting test requirements, the model 228B is a lower-priced alternative with a wavelength accuracy of ± 1.0 pm.

The 228 Series Optical Wavelength Meter is continuously calibrated with a built-in HeNe laser wavelength standard to maintain its accuracy over long periods of time. In order to achieve the highest accuracy, the model 228A uses a single-frequency HeNe laser that is stabilized using a precise balanced longitudinal mode technique. A standard HeNe laser is used as the wavelength reference in the model 228B. A unique Michelson interferometer design minimizes the variation between consecutive wavelength measurements, resulting in a repeatability that supports a confidence level of ≥ 99.7%. To verify this performance, every 228 system is rigorously tested with laser sources that are traceable to NIST standards.

Designed for productivity and convenience

The 228 Series Optical Wavelength Meter is a very efficient way to analyze the wavelength characteristics of WDM lasers. The measurement cycle time is only 0.1 seconds. The optical signal enters the 228 system system through an FC (PC or APC) fiber-optic connector on the front panel. The system’s high sensitivity results in a minimum input requirement of only -30 dBm (1 µW). Automatic electronic gain control instantly adjusts the photodetector signal for optimum performance. The controls of the model 228 are user-friendly and conveniently located on the front panel along with the measurement display. The measured wavelength and power, maximum and minimum values, and total drift over time are reported in various formats. These results can also be sent to a PC using a standard USB or Ethernet interface, or an optional GPIB interface. Finally, the 228 system is packaged in a rugged chassis (bench top or rack mounted) for use in typical laboratory or manufacturing environments. 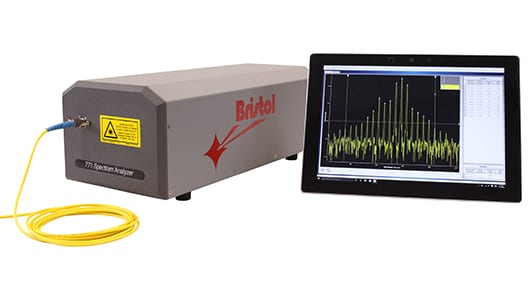